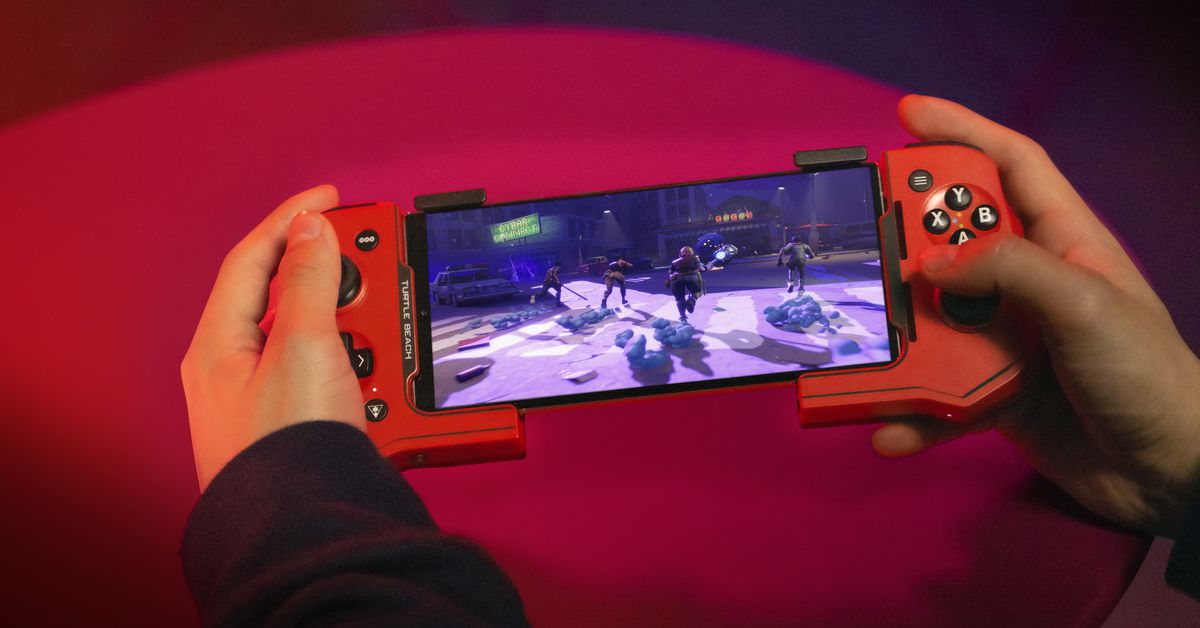 Hot on the heels of releasing its first cloud-focused controller, Turtle Beach is announcing a dedicated game controller for Android phones. The new Turtle Beach Atom is focused on mobile gaming and cloud streaming, as it’s only an accessory for Android phones. The left and right halves of the Atom attach to a phone via clips and connect to it via Bluetooth 4.2, which should save you from having to remove your phone case every time you want to play.

This $99.99 Android controller is available for pre-order now and is set to launch November 14 in three colors: red, black and teal, and black and yellow. The latter is officially Xbox licensed, with a branded guide button and one month of Xbox Game Pass included for new users. They’re not exactly the colors I think of when I think of Xbox, but it certainly matches the Atom’s slightly garish vibes.

Turtle Beach says the Atom uses full-size sticks and buttons for a console-like experience, though one thing to keep in mind is that these smartphone controllers are generally designed for portability. The Atom looks a bit chonky, although it tries to work around this by inverting its sides to magnetically attach them to each other – making for a slightly smaller package than if they just slipped them into each other like a Backbone or a Razer Kishi.

These competitors seem to be exactly what Turtle Beach is aiming for, as they all have the same price tag, although Turtle Beach definitely does things a little differently with its split design. For one thing, the Atom is completely wireless; not only does it connect to your phone via Bluetooth, but also the controller halves connect to each other via a 2.4GHz wireless connection. Since it doesn’t actually plug into your phone, there’s no passthrough charging capability. The Atom has its own rechargeable battery (two, in fact, with one in each half) that charges via USB-C. Turtle Beach claims it should last up to 20 hours and fully charge in 2.5 hours, although a phone will likely need to be charged during an extended gaming session long before the Atom.

In addition to playing Android games, the Atom is designed for cloud gaming and streaming with services like Xbox Game Pass, Nvidia GeForce Now, and Steam Link. Turtle Beach makes no mention of PlayStation compatibility, so it probably won’t work with remote play on a PlayStation 5 or PlayStation 4. The Atom doesn’t work with iPhones at all, which is unfortunate since Apple plays well with Bluetooth Controllers from Microsoft and Sony. These are features where it looks like the Backbone One will continue to have an edge. However, like Backbone, Turtle Beach will have its own companion app to go with the Atom, which lets you configure features and search for games.

While the big companies in the gaming and tech world are still discovering cloud gaming, Turtle Beach seems to be taking a shotgun approach between the Recon Cloud and the Atom – trying to appease as many styles of game as possible. That is, of course, with the glaring omission of anyone using an iPhone or wanting to stream their PlayStation consoles via Remote Play.

The Atom seems like the logical progression for Turtle Beach after the Recon Cloud, but now that it’s trying to go pound-for-pound with the Backbone One and the Razer Kishi, the stakes seem a bit higher.