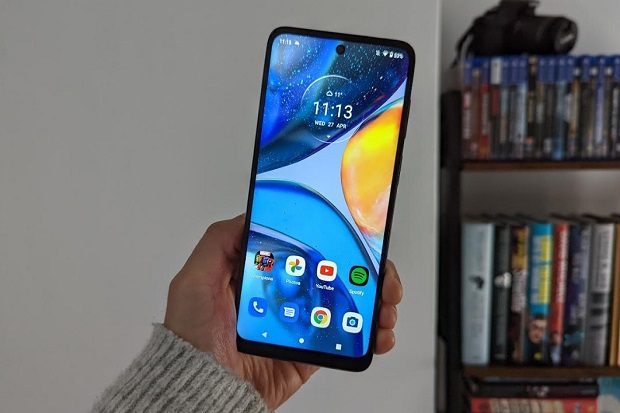 The Moto G22 is an affordable Android phone that’s great value for money and has very solid battery and camera specs – but is ultimately held back by poor performance and a 720p LCD that’s just not quite bright.

So let’s stay on the safe side, because the benefits don’t stop there. Although it’s all plastic, the overall design is nice. We liked the clean Android 12 software. And it’s great to see the inclusion of face and fingerprint unlocking.

If you sensed a “but” on the horizon, you were right. Unfortunately, the G22 has plenty of common issues that plague any handset that dares get too close to that £100 mark. We found performance to be consistently sluggish, and while we liked the overall size of the LCD screen, the brightness was lacking.

It won’t come as too much of a surprise that spending around £150 on a handset doesn’t get you award-winning technology, even though many of the devices on our best-budget smartphone list have plenty of great qualities. So, does the Moto G22 do enough to earn a spot, and who exactly is this ultra-affordable phone aimed at?

The Moto G22 is a budget Android smartphone that will suit anyone looking for a sleek handset with great battery life and a solid camera setup. It’ll be fine for basic gaming and internet browsing, but it can definitely be sluggish at times, so if speed and performance are your priority, it’ll be best to look elsewhere.

How much does the Moto G22 cost?

It’s a tricky price. It’s as cheap as we’d recommend for a phone, but anyone used to a high-end handset will have an uncomfortable experience. While the G22 will have an audience, there’s plenty of competition there.

Although performance often seems below average, the Moto G22 is certainly not a bad smartphone, and some key specs stood out during our time with the review unit – a “Cosmic Black” variant with 64GB internal storage.

We’ll start with the size of the handset. The G22 is comfortable to hold and can pretty much be used without the need for both hands. The plastic construction definitely makes it a budget phone, but it also keeps the weight down and at 185g it will never become inconvenient to have in your pocket.

The 6.5-inch LCD (1600 x 720 HD+ resolution) is crisp and clear enough for the money, although we’ve always wished the brightness could go a step further. While this is fine for indoor conditions, you may struggle when the sun is out. We used the G22 with brightness throughout the two-day test.

We weren’t too impressed with the colors displayed on screen either. There are two modes: Natural and Saturated, as well as a color temperature slider ranging from “cool” to “warm”. In the end, we kept it on Saturated because the Natural option gave the screen a washed-out orange-yellow tint that just wasn’t good.

The Motorola phone, which doesn’t have 5G connectivity, comes with Android 12, and it was great to see that there was no bloatware (usually unwanted pre-installed software) when it started up. We also had no complaints with the overall feel of the phone’s user interface, and the whole layout is minimalistic and easy to use.

The screen has a 90Hz refresh rate, which means scrolling through apps should be silky smooth. On paper, this is a major selling point. However, we found that this often did not matter. The MediaTek Helio G37 processor seemed to struggle, and the sluggish performance caused us to experience some lag and stutter when opening or switching apps. Navigation was sometimes a bit slow too.

It’s strange to say, but we kind of got used to it from the second day of use. It is very likely that our review was tainted by coming directly from a Google Pixel 6.

Despite the slow navigation, we actually found several games to run well in our tests. We have uploaded titles including Need for speed: no limits and Marvel Contest of Champions and they have always worked without a problem. You’ll find the occasional stutter here too, particularly with more power-hungry titles, but the handset won’t struggle to play even the most basic gaming apps.

If 64GB of storage isn’t enough, you can add up to 1TB more using a microSD card, and the phone comes with a 3.5mm jack on the top for wired headphones. The Bluetooth 5.0 connection also worked well when pairing wireless headphones.

If performance is a downside to this budget Android, then battery is the opposite. The G22 has a 5000mAh battery that will easily last two days of moderate use. While how long a battery lasts is always determined by how much you use the device, we were impressed with how much juice it had in the tank.

We started a 10 hour YouTube music video when the phone was at 90% and it dropped around 10% within an hour of constant use. Music streaming was noticeably better. Streaming a Spotify playlist for an hour resulted in a loss of only 4%.

As a guideline, when it was at 65%, the handset’s battery settings menu said it still had one day and 23 hours left.

In our charging test, it went from dead to full in about 2.5 hours using the wall adapter. While it’s not the fastest, you’re unlikely to have many complaints about the amount of charge you get at 100%. With pesky performance issues in mind, keeping the smartphone at a 60Hz refresh rate will improve battery life even further.

The G22 features a quad-camera setup, consisting of 50MP (megapixels) wide, an 8MP ultra-wide sensor, a 2MP depth sensor, and a 2MP macro sensor. The selfie camera is 16MP. We found it to be a perfectly capable setup for the money, with solid image quality when shots were taken in brighter conditions, especially with the prime lens.

Here is a collection of photos taken using the main sensor:

And here are some shots showing the wide and ultra-wide lenses:

As you can see, the results are nicely detailed and should be enough to satisfy most users buying at this price. It’s reassuring to know that paying budget prices no longer means you’ll end up with mediocre cameras by default.

Overall, while the setup isn’t very useful in darker conditions due to noise levels, the results are very solid when there’s a better amount of light. In the end, we had very little to complain about (again, for the money) and the shots were sufficiently detailed with natural color. Sure, it’s a no-frills system on the G22, but it works well.

The G22 is a nice budget phone. The all-plastic build doesn’t feel cheap, and we liked the colorful shine on the matte back panel. As mentioned, we also liked the overall size of the phone (163.95mm x 74.94mm x 8.49mm) and it’s fairly easy to use with one hand. The display bezels are also pleasantly small.

The ports are where you expect them to be. The G22 power button, which doubles as a fingerprint sensor, sits on the right side along with the volume rocker. At the bottom are the speakers and the USB-C port, while the SIM slot is on the left. The good news for fans of wired headphones, the top of the phone has a 3.5mm jack.

It’s a safe design, and that’s pretty much what you’d expect when you launch a budget Android phone. For a handset under £150 we had no issues with the look. One thing to note is that there is no IP rating, with Motorola describing the phone as “water repellent”. Not a huge surprise, but definitely a factor worth noting.

Our verdict: should you buy the Moto G22?

The G22 is another laudable low-cost effort from Motorola. It’s for anyone who needs a very affordable phone and doesn’t care about having the best specs and performance, with a higher priority on design and battery life.

Maybe it’s a child’s first phone, you need a new handset for calls and the occasional Google search, or you’re going abroad and need a phone that can be thrown away. in a bag without too much hassle. There’s certainly an audience for it, but obviously anyone coming from a flagship handset – or even a model in our best mid-range phone guide – is likely to have a pretty miserable experience.

Battery life, camera design and specs are pluses for the device at this price point, but there’s no doubt that performance can be tricky at times. The screen just isn’t bright enough either, and paying just £50 more gets you an AMOLED panel in the Xiaomi Redmi Note 11. With the G22, being so affordable often comes at a cost.

Where to buy the Motorola Moto G22

The Moto G22 is available to buy from several popular UK retailers:

For news, reviews and offers, check out the Technology section of RadioTimes.com and why not consider signing up to receive our technology newsletter.