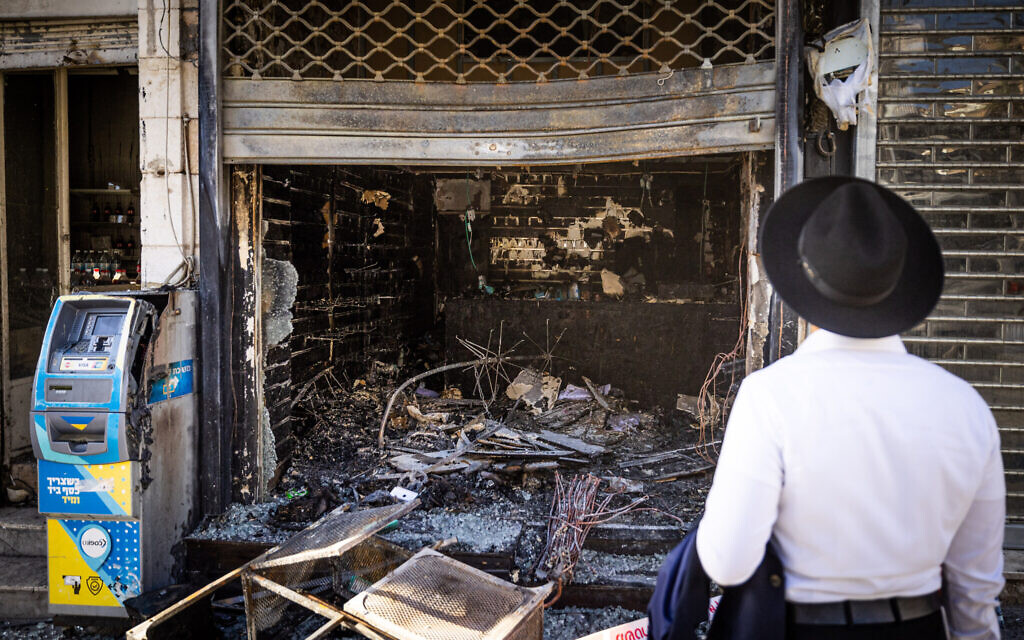 A mobile phone store in Jerusalem was engulfed in fire on Sunday night, with the store owner saying it was a deliberate attack for his refusal to stop selling a certain device seen by some as a “not kosher”.

Many ultra-Orthodox, or Haredim, Jews use “kosher” phones — either older devices that don’t have internet access, or smartphones with restricted access to certain websites, apps and features like social media and SMS – on the advice of rabbis.

The issue and its regulation are largely controlled by a body called the Rabbinical Committee for Communications, which holds strong influence over the “kosher” cellphone trade across the country, as well as powerful tools that have societal and commercial effects. .

Sunday’s fire broke out at a store called Kosher Phone in the capital’s ultra-Orthodox neighborhood of Geula, where similar incidents have been reported before, particularly at stores that refused to cooperate with the committee.

Although authorities have yet to determine whether the fire was the result of arson or an accident, the store owner is certain he was targeted by extremists after recently losing a certificate provided by the rabbinical committee.

“It was relatively quiet here lately,” Deri told the Ynet news site, “until a kosher inspector decided to take my certificate away.”

“Three weeks ago,” he said, “a kosher inspector sent on behalf of the Rabbinical Committee for Communications stopped and said he was withdrawing my certificate because he thought I was selling “non-kosher” phones.”

On Sunday, he received a text message from an employee informing him that the store was on fire. “I got there as fast as I could,” he said.

No injuries were reported in the incident, but the store was destroyed.

A statement from the Fire and Rescue Authority said the blaze caused damage to several adjacent stores. The statement did not indicate what could have caused the fire.

Police have opened an investigation into the incident.

Haredi Jews make up 12.6% of Israel’s population, or 16% of Israeli Jews, and are one of the fastest growing communities in the country. And while the term actually refers to several diverse sects and denominations, all Haredim are united in their adherence to Jewish law in all aspects of their lives and their complete rejection of Western sensibilities. Rabbis learned in the law make rulings on everything from modesty requirements for women to personal health to marital relationships.

The Associated Press contributed to this report.

You are a dedicated reader


We’re really glad you read X Articles from The Times of Israel over the past month.

That’s why we started The Times of Israel ten years ago – to provide discerning readers like you with must-read coverage of Israel and the Jewish world.

So now we have a request. Unlike other media, we don’t have a paywall in place. But since the journalism we do is expensive, we invite readers to whom The Times of Israel has become important to support our work by joining The Times of Israel community.

For just $6 a month, you can help support our quality journalism while benefiting from The Times of Israel WITHOUT ADVERTISINGas well as access Exclusive Content only available to members of the Times of Israel community.

Thanks,
David Horovitz, founding editor of The Times of Israel