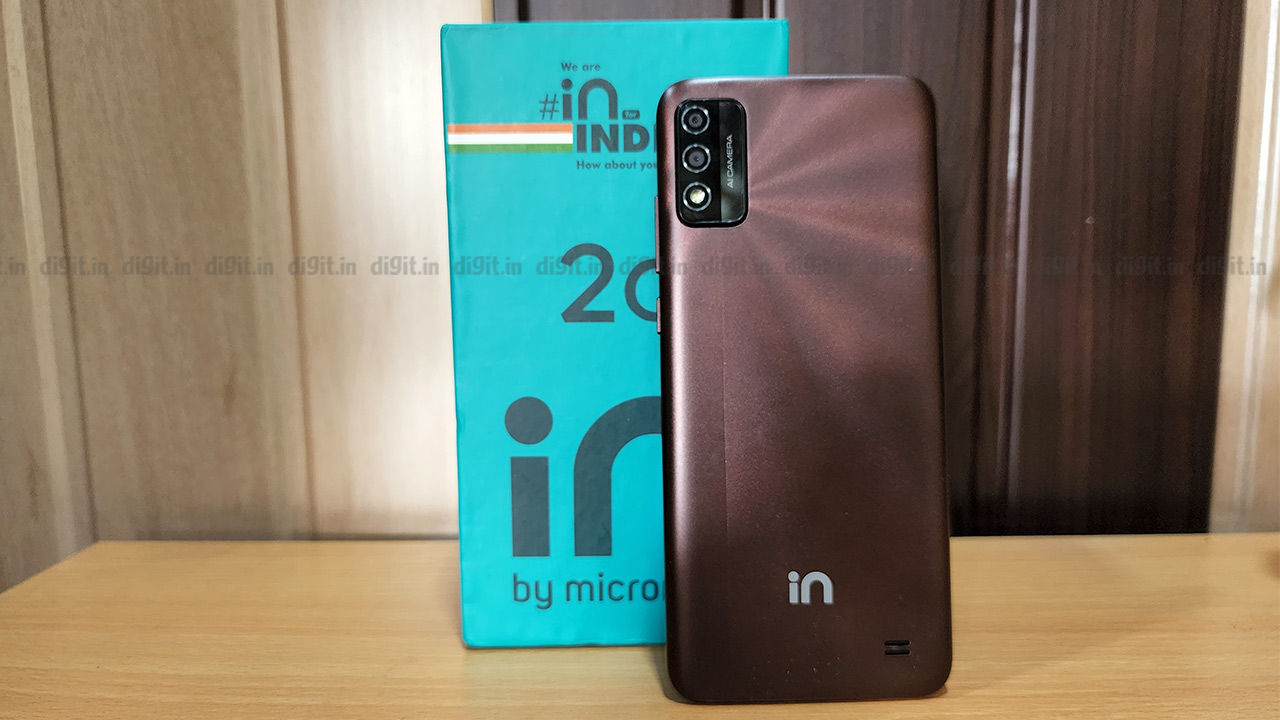 The budget smartphone segment in India is booming owing to the price-conscious Indian market. There are several options offered by companies such as Xiaomi, Realme, Tecno, Samsung, Infinix and others. Micromax is an Indian smartphone company that caters to the masses with its cheap smartphones. The latest budget smartphone offered by the company is the Micromax In 2c. We got the unit a week before launch and tested it in various scenarios. So, is the Micromax In 2c a good value product in the sub-10K price segment or will it be overshadowed by others? Let’s dive straight into the review to find out.

The Micromax In 2c is a well-built budget smartphone with two color options that users can choose from: brown and silver. We got the first one for review and were very happy with the matte plastic back with a textured finish. However, we’d prefer another color to the provided brown as it’s not exactly the most attractive color. The back has a radiating design coming from the camera module which looks quite decent. 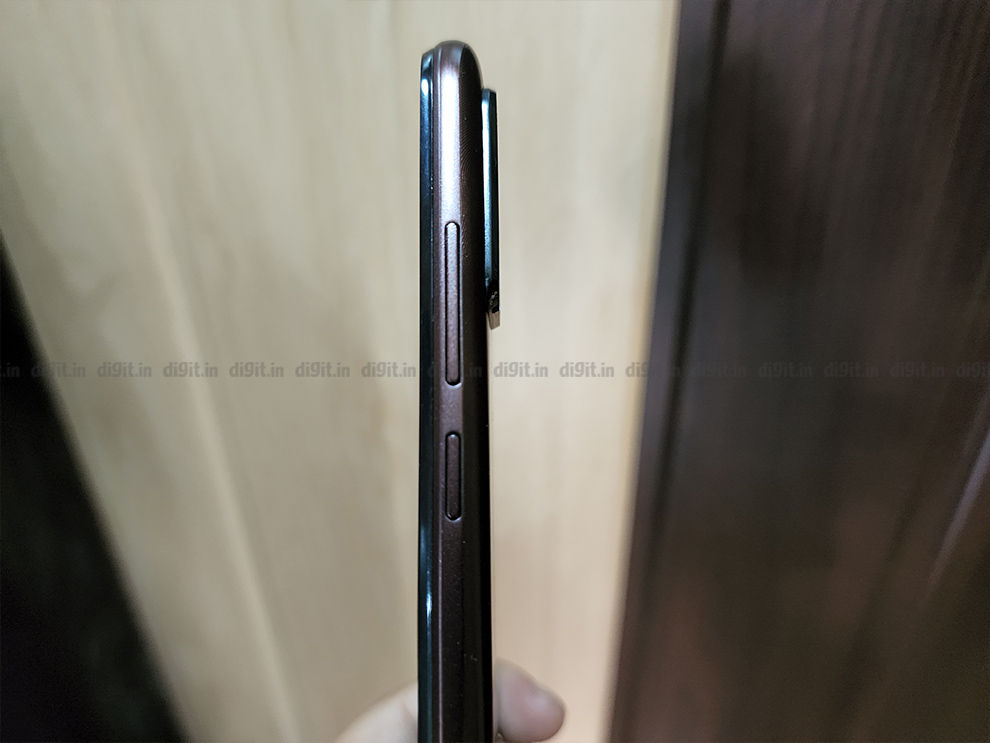 The camera bump houses two lenses and doesn’t protrude too much. The back also has the Micromax logo which is a little too big for our liking. The phone is solid to hold with little to no creaking when flexed. The buttons have good feedback and are quite tactile, which is not common at this price point. The front of the phone is adorned with fairly large bezels and an even larger chin. The dewdrop selfie camera cutout looks dated, but we’ll give it a pass at this price. The bottom also houses a 3.5mm audio jack, which is a welcome addition. 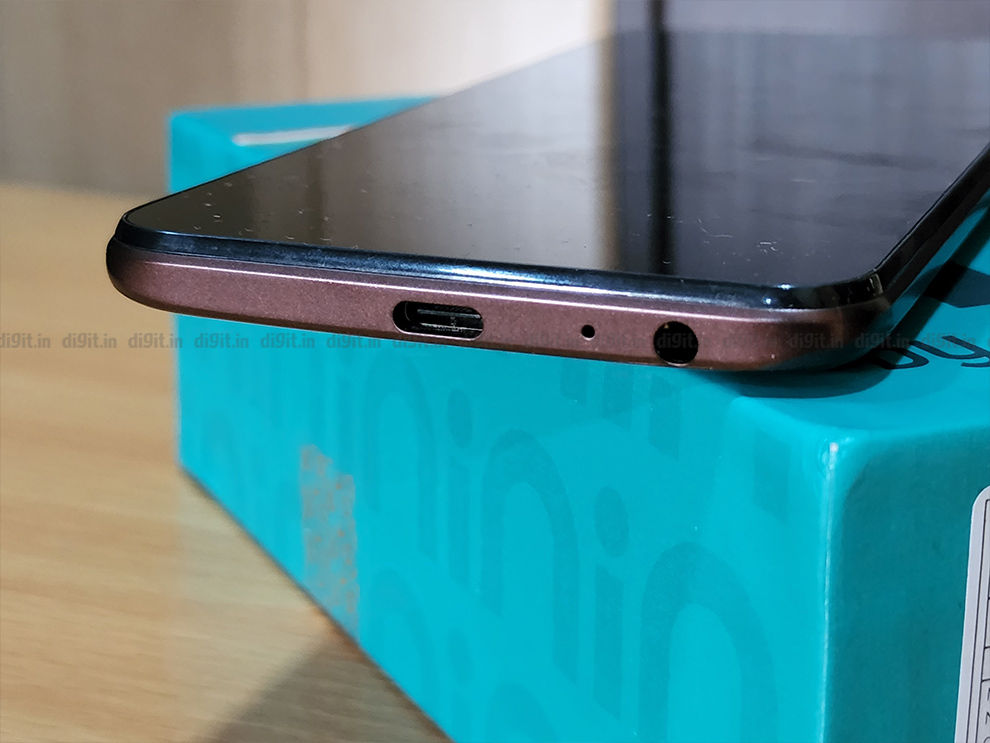 The Micromax In 2c’s screen is by no means what we would call a stunner. It’s a fairly basic 6.52-inch HD+ LCD screen with no fast refresh rate. If you were looking for frills in the display department, you’re not really going to find any. The glass used in the display is unbranded, so you won’t get the assurance of a Gorilla Glass display. You get WideVine L1 support for high definition content on streaming platforms, but Netflix did not play HD content on this phone for some reason. 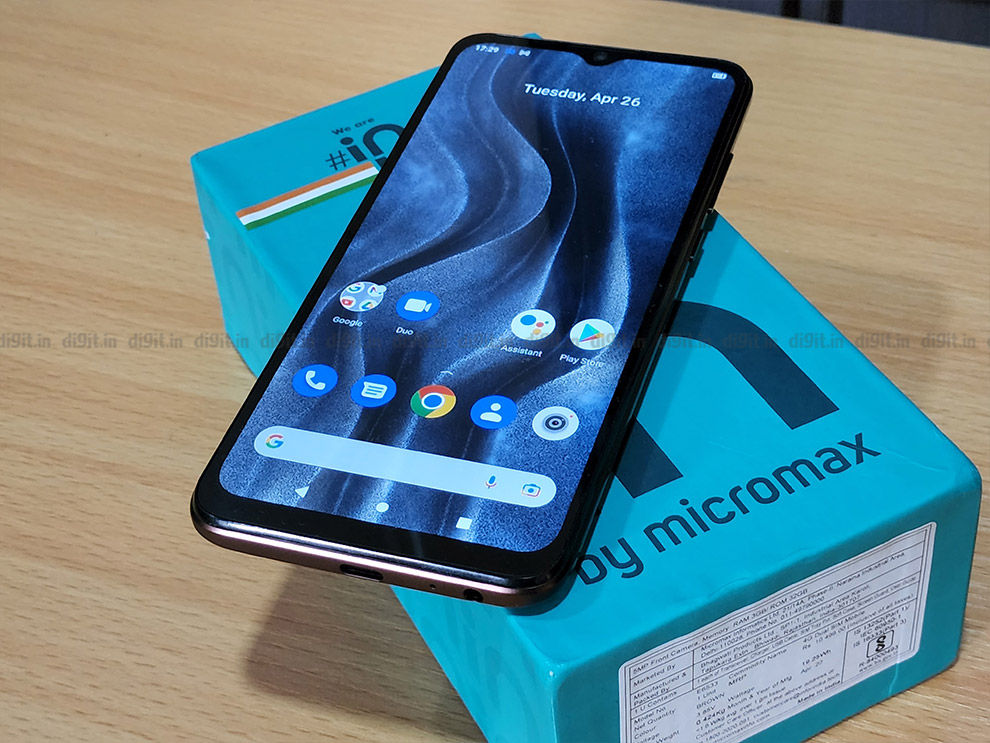 The screen’s color accuracy is decent and it has good viewing angles. However, readability suffers in direct sunlight and you may find it difficult to read the information on the screen. In testing, we got a maximum brightness of 152 nits, which is extremely low. The screen color profile can be changed in the settings, but we found the default version to be the most color accurate. Overall the phone is well built but comes with a mediocre display at this price point.

The Micromax In 2c is powered by the UNISOC T610 SoC with an octa-core processor running at a clock speed of up to 1.8 GHz. The processor runs on the 12nm process and is a pretty decent SoC for general day-to-day use like texting, calling, social media, streaming, etc. The phone comes in a storage configuration with 3GB of RAM and 32GB of internal storage. There is also an option to expand storage via microSD card up to 256GB. As for connectivity, the phone supports 4G, 3G and 2G networks and comes with Bluetooth 5.0. 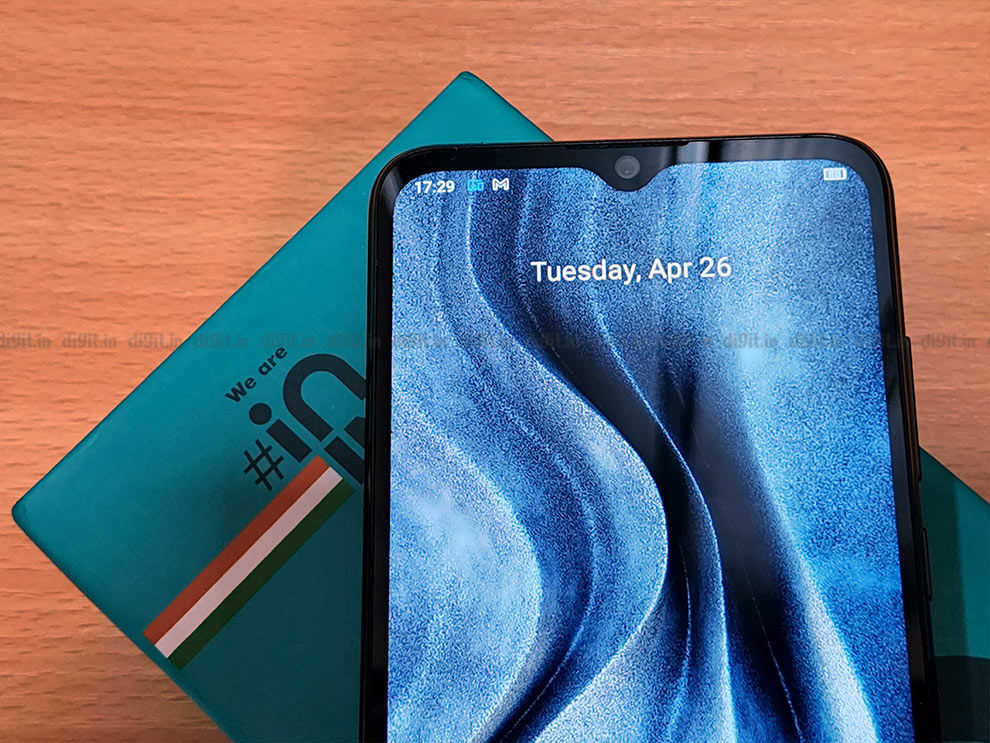 As we mentioned earlier, the phone is well equipped to handle general usage scenarios, but gamers and power users should steer clear of the device. The 3GB of RAM means multitasking isn’t as smooth as one would hope, with app crashes often occurring when opening multiple demanding apps such as games and benchmarks. 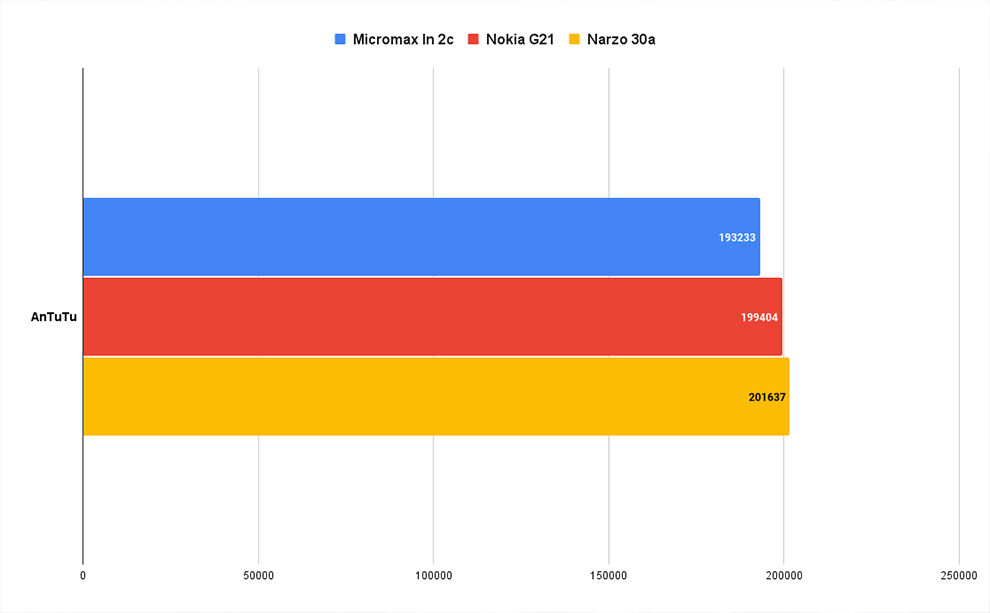 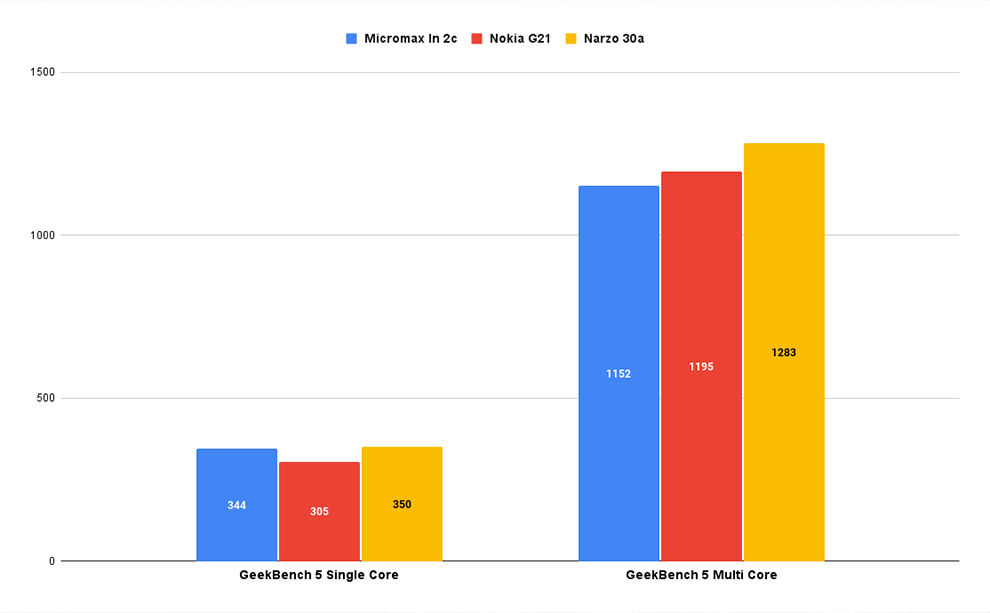 Speaking of benchmarks, let’s dive deeper into this. Running AnTuTu got us a score of 193233 which is neck and neck with its competitor – the Nokia G21. However, the Realme Narzo 30a, which is a much older phone in the same price range, beats it with a score of 201637. In GeekBench 5, the phone falls slightly behind the Narzo 30a in Single and Multi Core tests. But it beats the Nokia G21 in the Single Core test. As for PCMark Work, the Narzo 30a beats it by nearly 1,000 points, but it scores about the same as the Nokia G21. 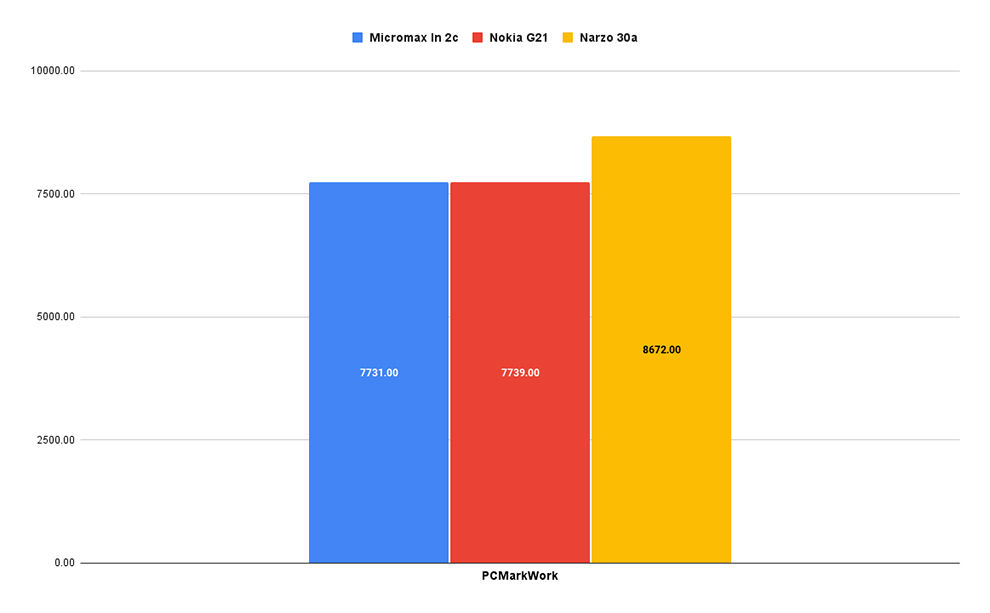 Moving on to GPU benchmarks, the phone does decently in 3D Mark Wild Life with a score of 524, but the Narzo 30a also takes the lead here. We tried running GameBench to test Call Of Duty’s FPS and stability, but the GameBench kept crashing when we tried to do so, probably due to lack of RAM. When we played COD Mobile, the game ran with low graphics and medium frame rate. The gameplay wasn’t exactly smooth, but the stutters and lags weren’t unmanageable. However, we still wouldn’t recommend this phone to a hardcore gamer.

So the Micromax In 2c doesn’t do very well in benchmarks and hovers a bit in multitasking. However, it is perfectly usable when performing everyday tasks and less intensive games such as Candy Crush.

The phone comes with Android 11 out of the box, completely devoid of any kind of bloatware in the form of third-party apps. We enjoyed the stock Android experience and it’s not something we experience often. The operating system runs smoothly with little to no stuttering and lag when moving across screens and scrolling. However, the phone can slow down when you fill it with apps and photos, so keep that in mind. When it comes to software updates, the phone will only get one major OS update, which is disappointing.

The camera is not the strong point of the Micromax In 2c. The phone is equipped with an 8 MP main lens and a depth camera. It comes with a 5 MP front camera for selfies. The cameras have poor dynamic range with overexposed highlights and crushed shadows. The color reproduction also leaves something to be desired. 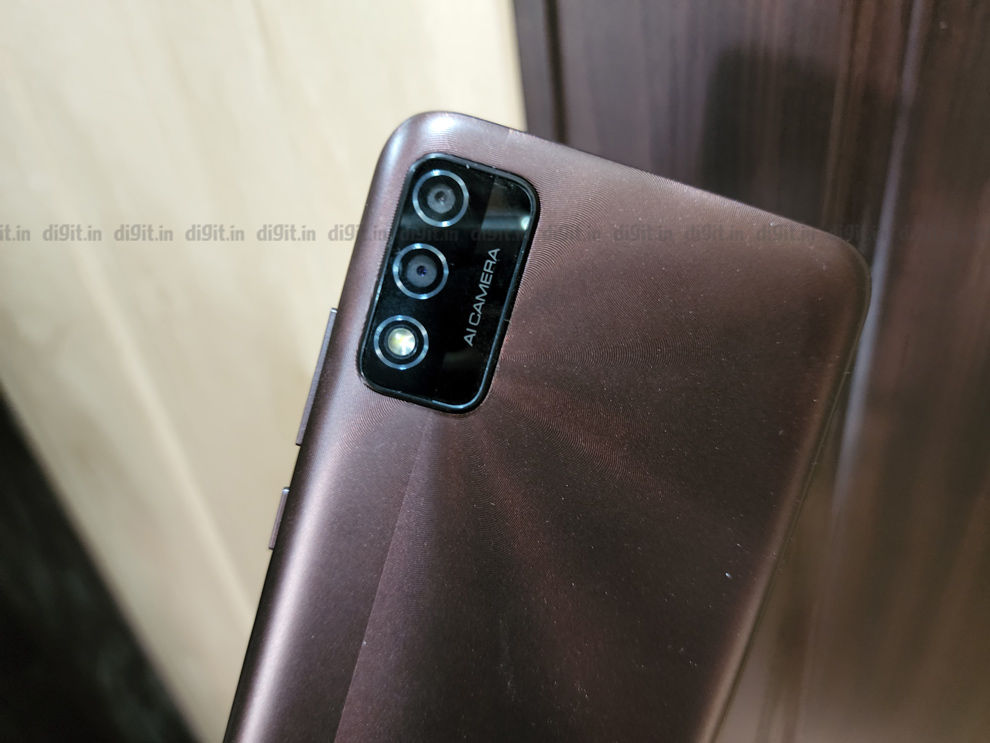 Detail in the photos you take is pretty good in daylight, but it quickly goes south when you’re in low light. Low-light images are noisy and soft. Night mode doesn’t make much of a difference, so the camera experience we had was pretty sour. Focusing on objects and people in low light conditions is also difficult as the phone does not come with any kind of stabilization.

The story is the same when it comes to video. The phone shoots 1080p at 30 fps and videos come out rather mediocre. Color accuracy is poor and dynamic range suffers as well. All in all, if the camera is important to you when buying a phone, we ask you to look away. 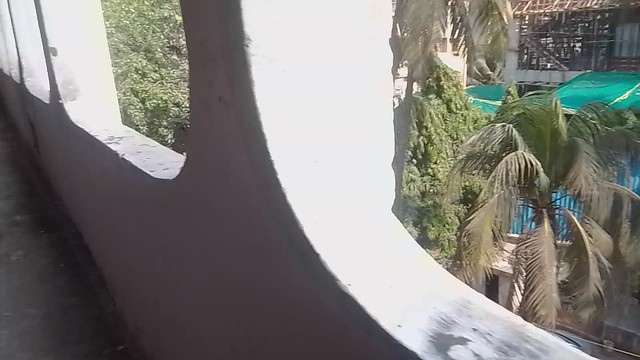 The Micromax In 2c houses a pretty sizable 5000mAh cell with 10W charging. The phone’s battery life is pretty decent and most users should be able to get a day and a half or two days of use. . We ran a range of games and tests on the phone during our testing period and still got more than a day’s worth of battery life.

The Micromax In 2c is an entry-level Android smartphone that doesn’t have much else to offer. Priced at Rs 8,499, the performance of the phone is poor when it comes to camera, gaming and charging. However, if you are looking for a simple phone that performs well for basic daily tasks such as calling, texting, social media, etc., this phone works well for that. However, we cannot fully recommend this phone to anyone as the Realme Narzo 30a performs better when it comes to camera and gaming by a significant margin and only costs Rs 500 more to purchase.